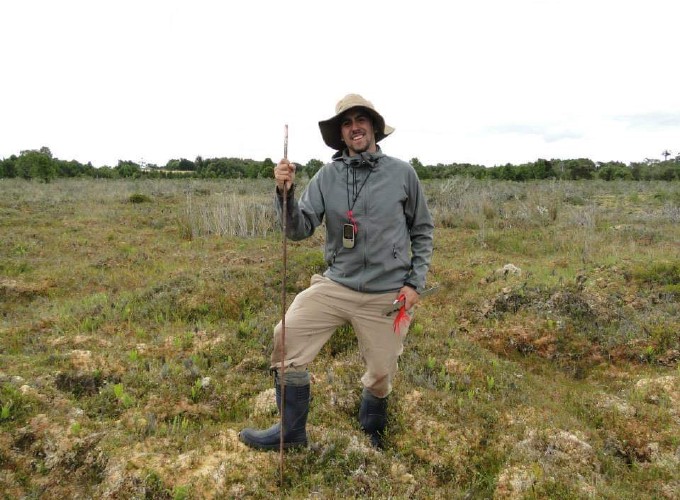 Peatlands are a type of wetland characterized by the accumulation of organic matter, called peat, and are important carbon reservoirs. In areas with poor drainage, human‐induced forest fires and logging can produce flooded conditions and organic matter accumulation, which generates an ecosystem called anthropogenic peatland. Productive management activities such as Sphagnum moss harvesting and livestock grazing take place there. Our hypothesis was that productive management has a strong impact on the aboveground C reservoir and increases the presence of exotic species. We established 44 sampling points in a 16‐ha anthropogenic peatland on Chiloé Island, Chile, comparing productive and conservation types of managements. Carbon stocks, vegetation structure and composition variables were quantified. These variables were used to classify the ecosystem into microsites to analyze the different locations in the peatland. In addition, predictive models of aboveground carbon were created using Landsat 8 OLI and Pleiades images. The results revealed a carbon stock of 11.99 ± 0.77 kg C m−2, which is smaller than in natural peatlands, and showed a wide variability of conditions within the peatland itself. This variability, mainly expressed in aboveground carbon, produces microsites dominated by either shrubs, species of the genus Juncus or grasses. Productive management reduced accumulated carbon in the aboveground stock and in the woody debris. However, the strongest impact was found on the vegetation variables, with a decrease in total cover, cover of shrubs and herbaceous plants, and in vegetation height. There was also an increase in the richness and presence of exotic species. The spatial prediction of aboveground carbon yielded significant results using only spectral indices, showing also that the impact of productive management is not homogenous, being less intense in waterlogged areas. This study is the first to quantify carbon reservoirs in this type of ecosystem and to propose variables that can be used as indicators of the impact of human activities.